Touring a show is no proper way of sightseeing, your experience of a city is reduced to its railway station, hotel, the inside of the venue you are performing at, and, if you're lucky, the late night eatery you sniff out after the show. These experiences, limited as they may be, give you a filter through which you get a flavour of the city.

Before touring, I had never been to Norwich, Newcastle, or Exeter for instance. Norwich now equates skulking around the cathedral with my director in the dead of night, hoping to find somewhere still open for food. I'll now never separate Bristol's rail station with a row of taxis rejecting to carry ourselves and the set (York's taxi drivers did not bat an eye). There's beauty in being in a city for such a short time, wheeling our way through Newcastle I wanted to drink in the buildings, the verdigris bridges, this collision of industrial past and modern trends. An extra day in Exeter gave me the quayside and its eerily still swans, Bristol showed me the skeleton of a giant stag and sea-serpents half excavated. In York I found out that it is possible to buy a wedding cake made entirely out of cheese.

Exeter's venue gave us the challenge of low ceilings and small width, Norwich and York on the other hand had ceilings so high they required a cherry picker. Venues ranged from volunteer-run theatres where I changed amongst a graveyard of stage lighting, to slick operations with automated grids and changing rooms with razzle dazzle lightbulbs around the mirrors. Whatever the experience of the venues in putting on our type of show, I think we were all bowled over with the generosity and enthusiasm of their staff, especially the technical teams.

Food and its obtention became an obsession. On the last leg of the tour I tried to sustain myself purely on packets of cheese croutons and apple puree. We stocked up for the day using the breakfasts provided by the hotels. Post-show, I'd try to persuade my body that I was hungry and should eat, when the come-down from adrenaline claimed I was full. We left theatres at a time where restaurants started to wind down, replaced by the cacophony of the drinking wave. We passed students dressed like smurfs, tottering stag parties, the brew of fights, and avoided the red-roped enclosures, finding places that seemed miraculous in their quality and quiet. We must have seemed strange to the staff, crumpled from the day, my hair chalked in mermaid colours, our talk an elated-type of tiredness.

Touring is a fleeting act, a temporary mooring, and as such it is also a long list of recommendations crumpled in the back pocket. My brief tasters of their walls left me thinking 'I could live here, I could live here', until the next city filled me with new possibilities. It is also a story of different audiences, another way of discovering the city, and their reactions both during and after the show. I cannot really compare the difference between the overwhelming enthusiasm of the York St John students to the first London show, almost entirely filled with close friends and family who knew the background of the poems intimately. The trepidation remains whether you are performing to strangers or loved ones. Touring is a series of adrenaline shots, a sensory overload in which I focus for 45 minutes, with the familiarity of my show.

The Shipwrecked House's next tour dates in 2014/2015 are London, Bridport, Oxford and St Andrews. Details on the website. 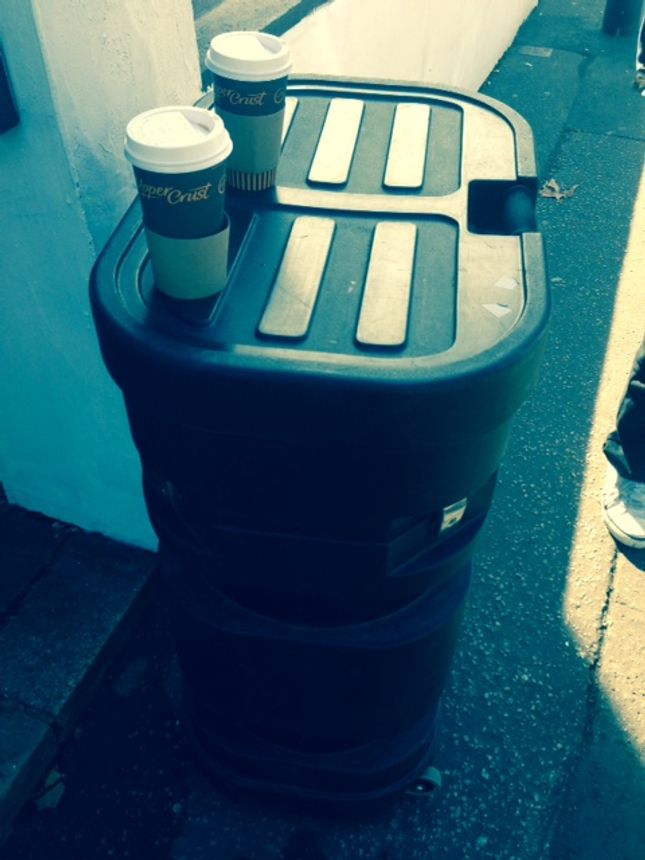 And you can catch @CTrevien @PennedintheM show The Shipwrecked House in London and Bridport v soon! http://t.co/1jUiYLJbmR

A "thinking gift" from me to you
Sophy Norris