Last night, my dad was going through my grandmother’s house clearing stuff out in preparation for its sale and found, among other things, my granddad’s deportation uniform. He wasn’t sure it’d still be there, he said, because of insulation work my gran had done in the attic, but was really glad he’d found it. Up until then, the only memento of that time that we have, as far as I know, is a tin tobacco box he had with him – it’s carved with the names of the camps he went to, a drawing of barbed wire, and my gran and his initials in a heart. My gran, who is 95 and has been landed with Alzheimer’s, has it with her in her care home, and while we’re all a bit worried she’ll lose it, if it can’t provide her with an anchor and comfort, then what is the point of us looking after it anyway?

I posted a picture of the uniform to twitter last night and the response was overwhelming to me. There were also quite a few suggestions that it be donated to a museum. I’m not sure how I feel about that. I suppose I always thought these uniforms were a dime a dozen. I wonder how my granddad would feel about this.

The tobacco box, this uniform, and his paintings are some of the few material clues I have to this man, Gerard Trévien, who died, long before I was born, from lung cancer. My mother only met him once, and he was already very ill then. A few years ago, I went on an internet search spree to find out everything I could about him. My father also provided me with a few more clues when I saw him last year, but it’s still not quite enough to get a full picture. The picture of the uniform has prompted a kind of research spree in me today, and while part of me thinks I should wait to distill this information, I also want to share what I know so far.

The things I know are this: that he was born on 26 February 1920 in Brest, and that he was a working class Breton (a metal worker at l’Arsenal), with Trotskyist convictions. He was part of a resistance cell of the POI (International Workers’ Party, French section of the 4th international) in Brest along with my grandmother. The POI published newspapers such as Bulletin Ouvrier-Paysan, Bretagne Rouge, and Front Ouvrier from 1941 to 1943, as well as numerous tracts. They also distributed the clandestine bulletin ‘La vérité’ from Paris.

Most members, like my granddad, worked on the shipyard at l’Arsenal, and were aged 18-23. In early 1943, some militant Trotskyists from Nantes had to take refuge in Brest, these included Robert Cruau and Georges and Henri Berthomé (also in their twenties) and joined them. The cell’s activities came to an end in 1943, my grandfather was caught in a mousetrap on 7th October 1943 and deported from Compiègne on 22 January 1944 to Buchenwald, then transferred on 16 February 1944 to Dora.The Gestapo went after the rest of the cell, it was rapidly dismantled, only a few, including my grandmother, weren’t deported.

What was different about this cell, was that they recruited German officers to their cause, who were also against Nazism. This movement of engaging German officers into the resistance was particularly active in Brest, thanks to the German-speaking Robert Cruau. An article published on 31 October 2004 shows my grandmother and André Fichaut, one of the oldest militants of the revolutionary communist league (LCR) asking the German embassy to recognize what these German officers had done. For the members of my grandparents’ cell, it was obvious that not all Germans were Nazis, nor could they all be held responsible for the acts perpetrated by the Nazis. It appears that 25 to 30 of these Brest-based German soldiers wrote and diffused in German, copies of Zeitung für Soldat und Arbeiter Im Westen (Journal for the soldier and worker in the West), 4 issues of 150 copies were published and distributed. Amongst other things, this newspaper tried to educate German soldiers on the realities of the war (including the fact that workers sent to Germany were not volunteers). They also distributed from Paris copies of Arbeiter und soldat, a clandestine Trotskyist journal. Retributions were grave for the German officers caught working for such cells, all were arrested and at least thirteen are known to have been killed, some it seems were sent to the Russian front. Robert Cruau was the only person to know all of their real names, as they operated by pseudonyms, not all members of the cell would have met them either. With Robert Cruau killed, and not many members of the cell still alive, will we ever find out their names?

It appears that it was one such German officer, called Conrad Leplow or Konrad Leplöw depending on the source, who did eventually betray my grandparents’ cell by organizing a mousetrap. André Calves, who was part of the same resistance cell, wrote an incredibly useful book called Sans Botte ni médailles: un trotskyste Breton dans la guerre. A large chunk of it is available online, including his account of the mousetrap here, which I’ll translate below:

‘I go by the coop where Yolande Guérin, the sister of Gérard Trévien’s wife, works and eats. She looks at me like a ghost. She doesn’t have time to explain anything, before Micheline Trévien arrives and hugs me while crying. Gérard has been arrested along with other mates, including Marcel Beaufrère who’s arrived from Paris. Robert Cruau was killed. We don’t know if he tried to escape or if the Gestapo killed him deliberately. I explain that Conrad told me to meet him at Darley. Micheline says “it’s Conrad who betrayed us. He participated in the searches. There’s a mousetrap at Darley’s. That’s where Gérard was arrested.” I now needed a chair.’

The few examples of Gérard’s writing that I could find online talked about his friend Yves Bodénès who died at Dora. The extracts below come from a letter he wrote to André Calves shortly after his return:

‘We only exited three hours per day, we lived in that tunnel, no need to describe to you the atmosphere, smoke, dust, powder, you can easily imagine. He stayed two days on a mat in a bad state but in good spirits. I did what I could for him, not much because I couldn’t.’

‘If you want info on our activities at Compiegne and Buchenwald, go find Liber, he was with us, it’ll save me making a diary out of this letter.’

If anyone knows who Liber is, undoubtedly a nickname, I would love to know.

There is a larger extract of Gérard’s letter that I feel is important to share. It starts again about his friend Yves:

‘… I liked his talents of observation. They amused me. Now I don’t regret coming here, he said, it’s something nearly indispensable to all revolutionary militant, you see individuals under another light, money and class don’t exist anymore. Here we are equal. Look at that commandant picking up crusts from the floor. I chatted with that officer, side by side in the bog, I wanted to call him a materialist. Yves enjoyed being around officers. He made himself a friend out of a colonel, and if I really wanted a laugh, I listened to them. Yves tutoyed him and it was the Colon who said ‘vous’. I envied his way of attacking and convincing them. I will make a militant out of the colonel, he told me laughing. I am too working class, too brusque to chat with those types. I wanted to be like Yves, but I couldn’t be. Everytime I took one up, I nearly fought with him, I couldn’t help it. Yves wished you were with us, and I would have loved to see you with those bourgeois. I think that for a time you would have found them more interesting than the proles.

When in Buchenwald people spoke about Dora, it was the camp ‘you don’t come back from’ and at the first transport out we were in it. No need to worry about it, I said, we only die once, said Yves. Poor guy, one month later he was dead. Now when I sing ‘Les survivants’

I think of him, a brother to avenge

In these camps, we were like animals, no minute to ourselves, we could only chat with work mates, for me I only had bourgeois many of which are dead, and a few proles including 4 interesting one. I didn’t have much chance with my mates, two of them followed Yves, and I’ve just learned of the death of the third and best during the evacuation. He was from Grenoble. The fourth is an old militant communist, secretary to the syndicate whom I convinced of the errors of the Communist Party and the death of the Third (international). He made me happy the day he said it was up to the Fourth to raise the flag. I don’t know if he’s still alive, I hope to know soon.

So as I said, we were commanded by the SS and for the direction of the camp: cabins, shower, dress, etc. For work in the Kommandos: by common right Germans, or by the Polish, Czechs,… Those brutes took every excuse to hit or steal from us. What makes me feel better is that I killed one of them with the help of a friend. I squashed his head like one squashes a toad. He killed many people, I am glad to see them avenged. Political German prisoners weren’t many in the camp, and weren’t worth much either. I don’t know what they did to be ‘political’, I only met about two that were fit to drink and even then they were too high and mighty for us simple Halflings (hobbits? half-measures?). I’m going to stop because this is becoming a diary.’

After the war was over, and prisoners released from camps, my grandmother went down to the train station every day to see if Gérard was alive, the one day she didn’t go was the day he arrived of course.

I’ve only begun to scratch the surface today, prompted by that picture, and have made contact with some of the children of POI members, but if anyone else possesses information, I’d be grateful if you could drop me a line at ctrevien at gmail dot com. 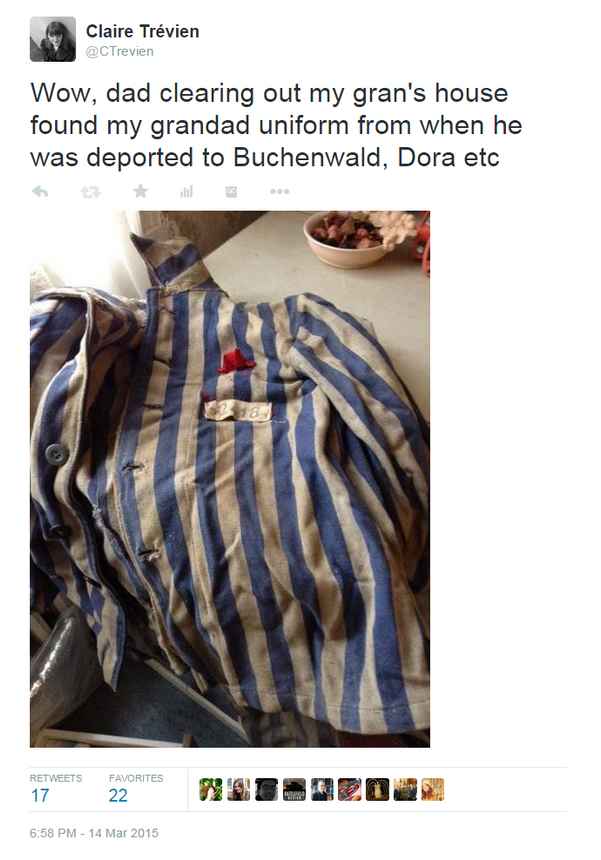 @CTrevien Bloody hell! That's an heirloom and a half! Genuinely stumped me that tweet. Jeez.

@CTrevien Oh my goodness. And yet here you are today, the grandchild, living your life to the fullest! So take that, Nazis.